The Weakerthans at Bowery Ballroom 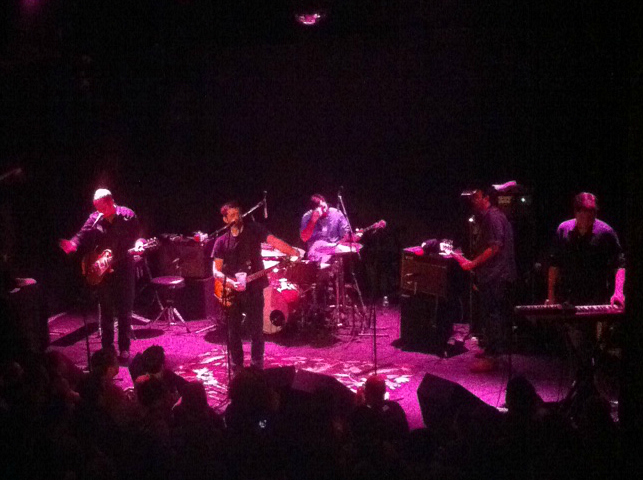 While they made it onto my favorite NYC concerts of 2011 list, I haven’t had a chance to give the Weakerthans’ December 10 show at the Bowery Ballroom a proper recap. It was my first time to see them play live, even though I’ve been a longtime listener of their music, which is led by the vocals and guitar of former Propagandhi member John Samson. They were performing a series of four concerts at Bowery, each featuring one of their albums in its entirety. I ended up with tickets to the Reunion Tour night. (Reconstruction Site seemed to be the first to sell out, of course, before I got into the ticket buying game.)

The Weakerthans have been around since 1997, which has given them plenty of time to amass a cult of fans, who turned out enthusiastically for the show. Reunion Tour was released in 2007, and has a lot of the well-crafted, lyrics-oriented indie rock that absorbs you while listening and murmurs back into your ears long after. “Night Windows” off Reunion Tour is one of theirs that sometimes feels like a soundtrack for your own life, with a personal accessibility that’s hard for music to pull off.  “Sun in an Empty Room,” about moving out of an apartment, is another great one:

However, the song that most gets me off the album, and that I almost can’t even stand listening to, is “Virtute the Cat Explains Her Departure.” On Reconstruction Site, Virtute the Cat was introduced as a rescued stray, who is trying to get her owner up out of his misery. It ends: “All you ever want to do is drink and watch TV/And frankly that thing doesn’t really interest me/I swear I’m going to bite you hard/And taste your tinny blood/If you don’t stop the self-defeating lies/You’ve been repeating since the day you brought me home/I know you’re strong.”

So, that song nearly makes me cry every time I hear it, but “Virtute the Cat Explains Her Departure” is never nearly, it’s always a heartbreaker. In it, Virtute explains what made her run away one night, and how now she “can’t remember the sound that you found for me.” That line just kills me every time, because what else is a pet’s name to them but a sound that you discovered and make just for them? And what better describes the loss of their home than forgetting that sound to the greater vast noise of a city?

Anyway, their cat songs always get me. However, the whole concert wasn’t all emotional tearjerkers, and they also played some of their more fun and clever songs like “Our Retired Explorer” and “Civil Twilight.” If you ever get a chance to see them live, take it! I certainly plan to take every chance I get.