I recently wrote a piece for Brooklyn Based on the history of Prospect Park, Brooklyn’s beautiful green oasis that is just a walk north of me. You can read all about its construction and design by Olmsted and Vaux in that post, but I thought I would share some photos from my research walk that took me to some unexpected corners of the park. Plus, it’s the end of summer, the lazy park days are turning into quick walks among fading foliage, so let’s look back at an overcast, but green, day in August.

I started by entering the park at the intersection above at the corner of Prospect Park West and Prospect Park Southwest, passing between two granite columns decorated with acanthus leaves designed by Stanford White after the Acanthus Column of Delphi.

Here’s a base of one of the lightposts that line the trails.

A strange shack was constructed near the old Quaker Cemetery contained within the park.

Ducks were swimming in the Upper Pool.

Dogs were swimming at the dog beach.

People were relaxing on the Long Meadow.

The Litchfield Villa predates and remains in the park.

Here is Ambergill Falls in the Ravine.

The Nethermead Arch is right at the center of the park.

The Camperdown Elm grows horizontally instead of vertically.

Here is the Cleft Ridge Arch.

It’s an arch worth spending a moment with to look at the details.

A stately eagle statue. There were plenty of real birds as well, including a hummingbird!

A tree was fallen in the woods.

A cardinal at the Vale of Cashmere.

The neglected formal garden of the Vale of Cashmere.

The brickwork at the Vale of Cashmere.

A last arch before leading the park. There had been some rain recently, so I did not dare cross.

Go out to Prospect Park this weekend if you can! It’s just as lovely in the fall. 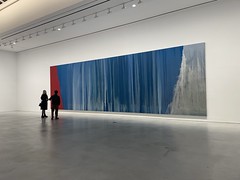 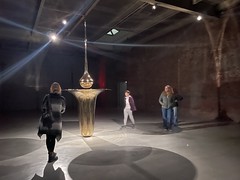