Central Park and its Zoo

Here is another flashback to when it was warmer. During my parents’ visit in August, we also paid a visit to Central Park, particularly the zoo. I’d never been to the zoo there before, although I’ve cut by it many times while traversing the park, walking below the Delacorte Clock where animals like this French horn-playing kangaroo twirl around on the hour.

The zoo itself is only six and a half acres of the 843 acres of Central Park, but many wonderful creatures are living on its grounds. A red panda from the Oklahoma City zoo actually recently relocated there, joining the many birds, seals, bears, and other animals.

The zoo started as a menagerie in the 1860s, and was the first official zoo in NYC. Its been modified several times since, notably in 1935 when many of its structures and the central seal pond were built.

There was a whole horde of enthusiastic children in the penguin house.

From the zoo, we explored more of Central Park, finding some less living, but not less lively, stone animals near Bethesda Terrace.

Down in the arched passage, some string musicians were riveting a crowd.

At the fountain, the Angel of the Waters was looking lovely as usual. The sculpture was created by Emma Stebbins, who modelled it after her lover, the actress Charlotte Cushman. 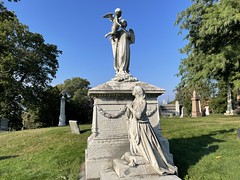 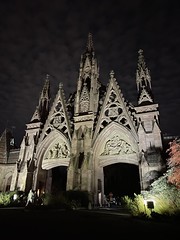