Paris, in Conclusion; or, the Stories You Can Get from Two Weeks of Travel

So I have finally, months and months after the adventure, uploaded all my Paris photographs to Flickr. Check it out!

I thought, since I won’t be able to blog each day, that I could summarize here for those who are interested my posts generated from the adventure, although with some stray photographs. Hope it gives at least a glimpse into the traveling.

I’m already hungry for more travel… but where to next?

Hélica: the car that dreamed it was an airplane at the Musée des arts et métiers

The tombs of artists

The Cemetery of the Dogs

Walid Raad at the Louvre

Grave of the Marquis de Lafayette

Eileen Gray exhibition at the Pompidou

Alabaster Mourners of John the Fearless at the Musée de Cluny

The balloonists of Pere Lachaise

The Musée Fragonard and the “History and Cultural Representations of Human Remains” conference series at the Academy of Medicine, & a Notes from the Field

The Defender of Time clock

The Museum of Everything

And those are the stories you can get from two weeks in Paris! An argument for more travel if I have ever seen one.

So when we last left off (and apologies for the lack of postings, it seems that now that I’m basically making my living as a blogger, that the blog where I got my blogging start as fallen to the wayside, hélas!), I had just arrived in Paris and spent a rather jet lagged day journeying around the city. Well, I got a whole night of sleep and felt millions of times better, but still woke up obscenely early. Since the apartment we were staying in was only a five minute walk from Pére Lachaise Cemetery, one of my favorite places to explore in Paris, I decided to go for a morning walk.

I’d never been in the old cemetery quite so early, just after its gates opened, and found that it was mostly full of old French men reading newspapers and eating croissants on benches, not really paying much mind to my ambling walk through the tombs. As the morning burned on there were more and more tourists, but for much of the walk I had the place to myself. Here are some of my favorite photos from the excursion:

This is a memorial for two balloonists who perished while trying to fly up too high. I wrote about their whole story here for Atlas Obscura.

The insides of the narrow mausoleums could be a bit unsettling.

Was this one the most unsettling?

Here is the grave of Felix Faure, once the president of France. I believe that’s the French flag draping over his body.

Some rather beautiful cats call the cemetery home.

This is the entrance to the “Aux Morts” (“To the Dead”) ossuary, which acts as the cemetery’s catacombs.

A shrouded angel (even the wings are covered, I think) grasping some cattails. Death keeping a hold on life? I read that the cattails are also a symbol of salvation.

This is the two-story 19th century columbarium. I heard that Maria Callas is interred here, but in the hundreds of plaques I did not see her.

I think this ill-looking face is supposed to be one of mourning, but it reminds me of Jacob Marley, a character who absolutely terrified me as a child with all the chains and  face wrappings.

I don’t think there is much kneeling going on in these mausoleums anymore. I read that there are only 30 year leases that have to be renewed on gravesites (if not renewed, you go to that ossuary), but many of these seem to have been long forgotten by families.

This was something I had not seen before: a gravesite shaped like a military tent!

Graffiti at Jim Morrison’s well-traveled tomb. This is as close as you can get due to barricades. Although there was no guard there to stop you from jumping over…

This bas relief certainly caught my eye! It turned out to be on the tomb of Robertson, a famed innovator of phantasmagoria. I also wrote about this tomb for Atlas Obscura, so check it out and read about the conjuring of fake 18th century phantoms!

Robertson was also a balloonist.

After spending the morning wandering, I headed to a cafe for some much needed coffee. I love many things about Paris, but the constant proximity of cafes with strong coffee is definitely a highlight. That and the dense cemeteries for exploring, of course!

The Overnight Flight to Paris

As you may have guessed, I have returned from Paris! It was a great two weeks of exploring. I thought I would quickly post some photo highlights from my first day. I took an overnight flight from NYC direct to Charles de Gaulle, which seems like a great idea, right? That way you don’t lose a day. You do, however, lose a night of sleep, which definitely hit me about 3 pm when I found I was falling asleep standing up. However, there is luckily an abundance of tiny, strong coffees in Paris and I made it through to a decent hour.

I also forgot what a nightmare those Paris subways can be with luggage! How in the world did I manage with my giant suitcase when I went to study abroad and later moved there? I was younger then… well, not by much actually, but I guess memory is doing a good job of erasing the boring, unpleasant parts. Anyway, I did make it to the apartment I was renting with a couple of friends and we then went for some exploration by foot. We started near Pere Lachaise Cemetery and made it quite far, all the way to the Jardin du Luxembourg, with much wandering in between. Here are some photo highlights:

I’m not sure how I never noticed this before, but all over Paris are these water fountains with drinkable water that were installed back when such necessities were scarce.

This appeared to be an even older drinking fountain. Although now it’s just a seating alcove, I suppose.

Place de la Bastille looked lovely. I gave a pretty incoherent impromptu talk to my friend on the taking of the Bastille here that was when I was breaching into jet lag exhaustion. I’m sure it got the point across…

I happened upon some Victor Hugo street art! (The photograph at the top of this post is by another awesome street artist, Fred le Chevalier.) This Hugo stencil was quite near the Victor Hugo Museum in the Place des Vosges, so of course we stopped inside to see the old Hugo residence with his questionable decor choices. (In one room, a carpet is on the ceiling for some reason.)

Walking in the Marais we also saw a pretty brazen space invader. He’s not even trying to hide!

I feel like this craze for putting locks on bridges is really getting out of control. This bridge is now more locks than bridge. Some people even put whole bike locks on the structure, which had then been covered with more locks by later visitors. Out of control!

This space invader, however, seemed ready to unlock all those locks!

I happened to be walking on this bridge later in my visit and stopped to check my map. An older French woman came up to me and demanded: “Did you do all this?” and gestured to the locks. I said no…

Our extensive walk ended at the Jardin du Luxembourg, where kids were pushing sailboats in the fountain with sticks.

I know I’ve been slow blogging here, but I have been writing. If you want some immediate Paris adventures, check out these posts for Hyperallergic and Atlas Obscura:

The Balloonists of Pere Lachaise Cemetery

The Museum of Everything

Eileen Gray at the Pompoidou 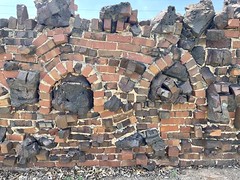 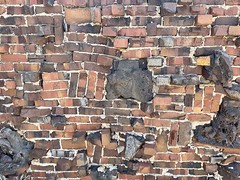